The Pareto Principle: In a Nutshell 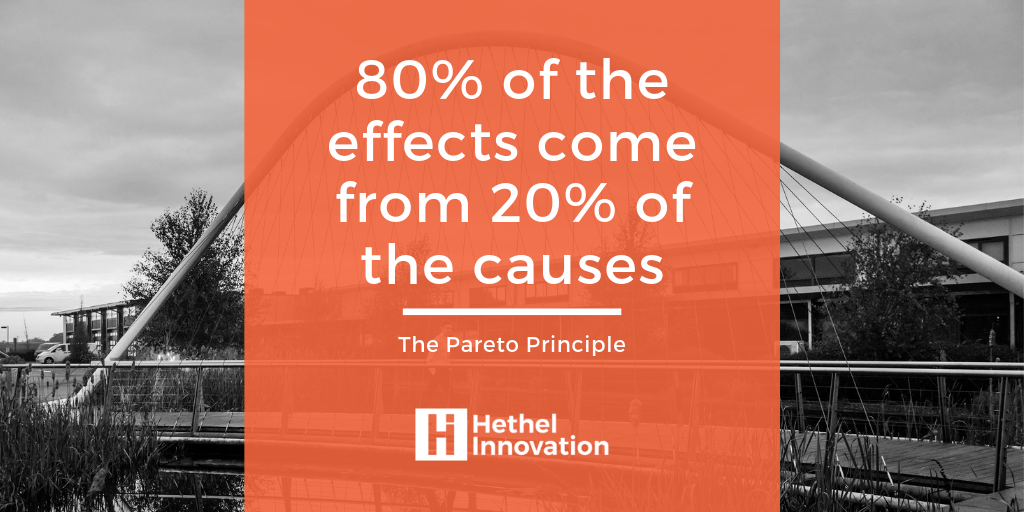 The Pareto Principle, also known as the 80/20 rule suggests that 20% of your activities will account for 80% of your results.

What is the Pareto Principle?

The theory was named after its founder, the Italian economist Vilfredo Pareto, back in 1895. He noticed that people in society seemed to divide naturally into what he called the “vital few,” or the top 20% in terms of money and influence, and the “trivial many,” or the bottom 80%.

Later, he discovered that virtually all economic activity was subject to this principle, in that 80% of the wealth of Italy during that time was controlled by 20% of the population.

We can take Pareto’s 80/20 rule and apply it to almost any situation.

How can the Pareto Principle improve your business?

The Pareto Principle can improve key areas of your business, including productivity and profitability.

By utilising the 80/20 rule, individual employees can prioritise their tasks so that they can focus on the critical 20% that will produce 80% of the results. Of course, this is not an indisputable figure, but the Pareto Principle teaches employees to not waste time on the ‘trivial many’ that will not contribute to the long term goal and to focus their resources on the ‘vital few’ that will produce the majority of the results.

The Pareto Principle indicates that a small percentage of your total amount of customers produce the majority of your revenue. Similarly, only a handful of your products and/or services attract the most sales. As such, analysing the leads and current customers you have can help you determine which ones have produced the most revenue in the past so that you can focus on pursuing only the most valuable leads. Further, discontinuing the products/services that don’t generate revenue and focusing on improving the ones that do can be ultimately more beneficial for the business.

How to apply the Pareto principle?

Here’s what you should do in order to effectively apply the Pareto Principle to setting SMART goals which will boost your overall productivity.

First, take a piece of paper and write down ten goals. Then ask yourself: If you could only accomplish one of the goals on that list today, which one goal would have the greatest positive impact on your life?

Then pick the second most important goal. What you’ll find is, after you complete this exercise, you will have determined the most important 20% of your goals that will help you more than anything else.

You should continue to work at those goals that you’ve chosen as the most valuable all the time.